Skip to content
Menu
Name Your Tree
Your FN
Menu

Hello ForestNation community, and what a couple of days I’ve had.  New people, guest speakers, negotiations, it was all part of G8 MY SUMMIT 2010.

It is a huge concept, so stay with me.  Youth delegates ages 17-25 come from the G8 countries (Japan, Canada, United States of America, United Kingdom, France, Italy, Russia, and Germany) to the host Summit country (this year it was Canada hosting the G8) to meet, discuss the topics of the G8,  as well as getting to experience the natural wonders of the Muskokas.  Each of the G8 topics was introduced by an expert guest speaker, and the negotiations that follow after which delegates use to communicate their ideas to the G8 leaders through a communiqué.  There are 2 delegates from each country (in most cases), they each take part in different negotiation sessions.  As the day went on these world youth met the other delegates and established a worldwide bond as they laugh together, presented together, and learned together.  The delegates and youth ambassadors first met in Port Sydney Ontario, just outside of Huntsville, where the G8 Leaders were also discussing the same four topics.  Eight youth delegates were chosen to personally meet the Leaders and hand deliver the Youth My Summit Communiqué.  After enjoying a closing concert featuring many incredible local artists, the delegates traveled to Toronto and where they were joined by the G20 Youth Delegates.

So that is the basis of the whole shadow summit, but the real details are below.

On June 24, I arrived at the Trillium Resort in Port Sydney, awaiting the wonders ahead.  The preliminary room was set up with the microphone and translators, and all we needed was the delegates.  There were Clean Air Tree Kits for all of them too!  As the delegates started to arrive via coach bus, the whole event began.  The first guest speaker, Mr. Norman Inkster, talked about terrorism and nuclear proliferation after opening remarks.  He is the former president of INTERPOL, and was responsible for 21,000 employees.  Between speakers there were breaks, where delegates refreshed, and where they received their own Clean Air Tree Kit and learned about ForestNation.  After the break it was back to negotiations while the next preliminary session happened.  The remaining topics and expert speakers were food security, spoken by David Stevenson, Director of Policy, Planning, and Strategy for the United Nations Food Programme, maternal and child health, spoken by Dr. Jean Chamberlain Froese, founder of Save the Mothers, and climate change, spoken by Dr. Shelia Watt-Cloutier, Director of Human Development and Gender Equality, Canadian International Trade Canada.

The delegates didn’t just learn: they saw nature!  The international delegates got to go kayaking in Clearwater Lake, see deer and other wildlife, go sightseeing on a ship, and listen to various music at a local talent concert!  If that isn’t already great, a special group of delegates traveled to the G8 Summit in Huntsville to personally present the communiqué that the youth delegates carefully put together for the leaders.  We were honoured to have a special meeting with the Governor General, Michelle Jean.  The Governor General invited all the delegates (130 of us) to speak openly about global matters.  It was a special privilege for me to speak to the Governor General of CANADA and present her with a Clean Air Tree Kit of her own.

It was inspiring to meet all the youth delegates and make new friends.   I would like to thank the Minister of Industry, the Honourable Tony Clement, Terry Clifford and Global Vision for support of youth initiatives and creating this opportunity to bring together the voice of youth around the globe.  The G8 MY SUMMIT 2010 is great for youth to get out, make international bonds, and learn how to make a difference.

To learn more about Global Vision and to find a training seminar near you visit: www.globalvision.ca

To learn what the ForestNation is doing about food security, go to our Haiti Tree Planting Project 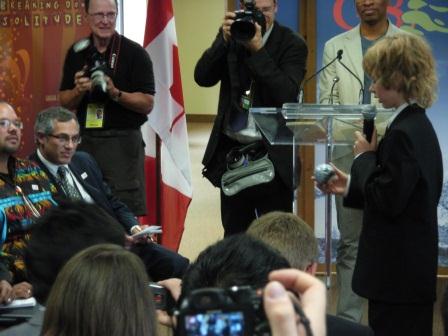 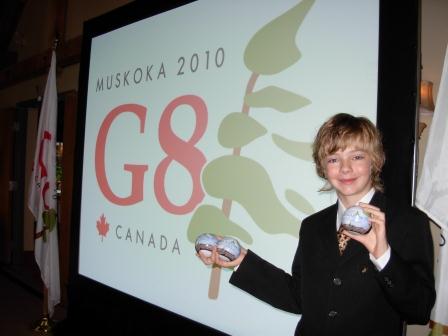 ForestNation’s mission is to help humanity thrive by re-connecting us to nature and to each other.

We don't show you adverts. We don't resell your information. You are anonymous in our site statistics. Cookies are essential to your experience while you navigate through our website. Opting out of some of these cookies will have an effect on your browsing experience. See our full Privacy Policy here.
Privacy Overview

We don't show you adverts. We don't resell your information. You are anonymous in our site statistics. Cookies are essential to your experience while you navigate through our website. Opting out of some of these cookies will have an effect on your browsing experience. See our full Privacy Policy here.

These cookies are absolutely essential for our website to function. They are loaded by default when you interact with different sections and facilities in our website. We anonymize IPs with Google Analytics so that you are anonymous in our site statistic.

Analytics cookies help us understand how our visitors interact with the website. The cookies collect this data and are report it anonymously. If you turn these off some videos will may not play properly.

Save & Accept
For You
Schools
Companies
Menu
More Links
Menu