Mr. and Mrs. Tomas above definitely blew us away with their passion for reforestation. They lived on a bare mountain with nothing, I mean nothing growing, the first time I visited them in 2010. The entire mountain was just rock and they begged me for help. They kept pulling out their pockets and showing me that they are empty. I said, “All I can offer are trees.” And Tomas said he’ll take trees. So over the next two years I saw his mountain transform right through two droughts from lifeless to what you see here. His property spreads way behind the house and he planted and watered all that we offered: mangoes, lemons, oranges, grapefruits and hardwoods. He was a nobody who became an example for all the village. Today their basic needs are met by what the trees provide. Many are very tall now like in some of the other pictures below.There are many people like him that tirelessly water their trees with buckets from a far away spring even during droughts which is so difficult and against the norm. Most carry water simply for drinking during droughts. We once gave an old man in Bwalo as many lemon trees as he wanted based on his good reputation in the community knowing he didn’t have good land with shade for growing them. We took a chance (lemon trees we bought from the city for 2$ US each) He took 100 and planted them across his bare mountain. He built shade for each of them with coconut leaf teepees. He walked miles everyday to and from the spring to water each one with a bucket never letting a day go by so the neighbors say. Lemons grow soooo slow. These were not grafted but natural, started from seed. Today they have survived and these small trees are starting to produce fruit. One day he will have an amazing orchard in a country where lemons have become extremely expensive and in high demand.There are a handful of amazing people in each village that take reforestation seriously and make a good example for others. Most people, however, take a few fruit trees and plant them around their home and these trees do survive, but we don’t ask most to plant more. From experience we have seen that if we give people trees all the way to their doorstep, they will generally die. People must walk a distance, load up what they will plant that day, and then come back for more. A few keep coming back but most do not. So this is why we visit lots of villages and educate and distribute a few fruit trees to everyone who comes to the seminar, and in return, we find a few great people willing to tirelessly reforest mountainsides because they have the same vision of Haiti that we do.

All that was in Bedard, Cavaillon, Haiti was barren, land with bushes and very few trees in 2010 before we began planting. Here you see 5 sed trees that were planted with Forest Nation funding that are only a few years old here and quite large hardwoods.

A handful of great reforesters standing with me in 3 years after we began.

When we met this man high up on the mountain behind Bedard, he showed us his simple nursery. We shook his hand and gave him $50 and let him know that people all over the world are donating to help people like him. 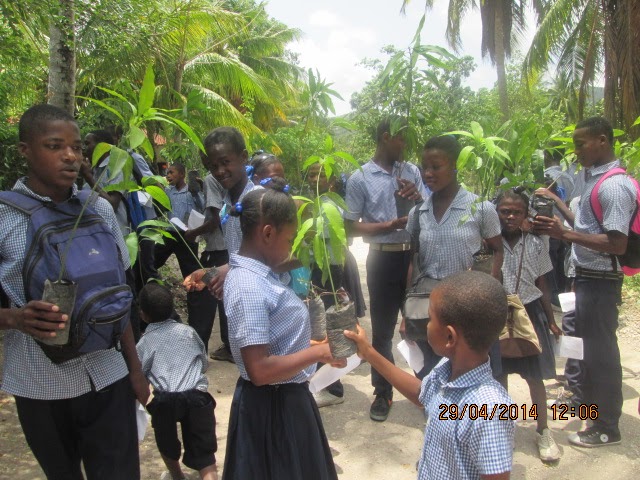 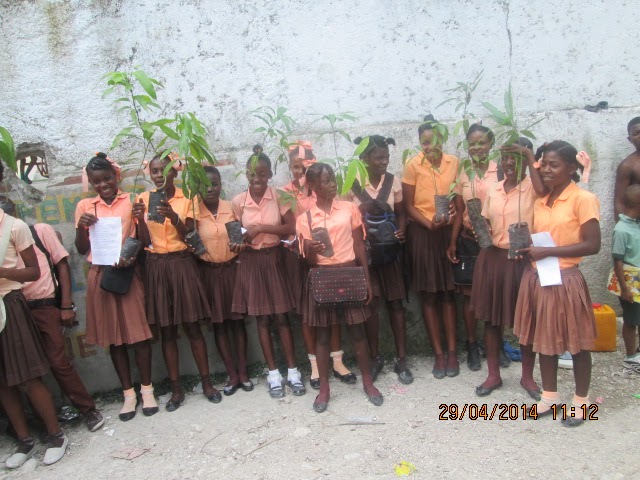 We always give seminars and distribute them to older kids in schools, so I’m sure some of the ForestNation trees went to schools too 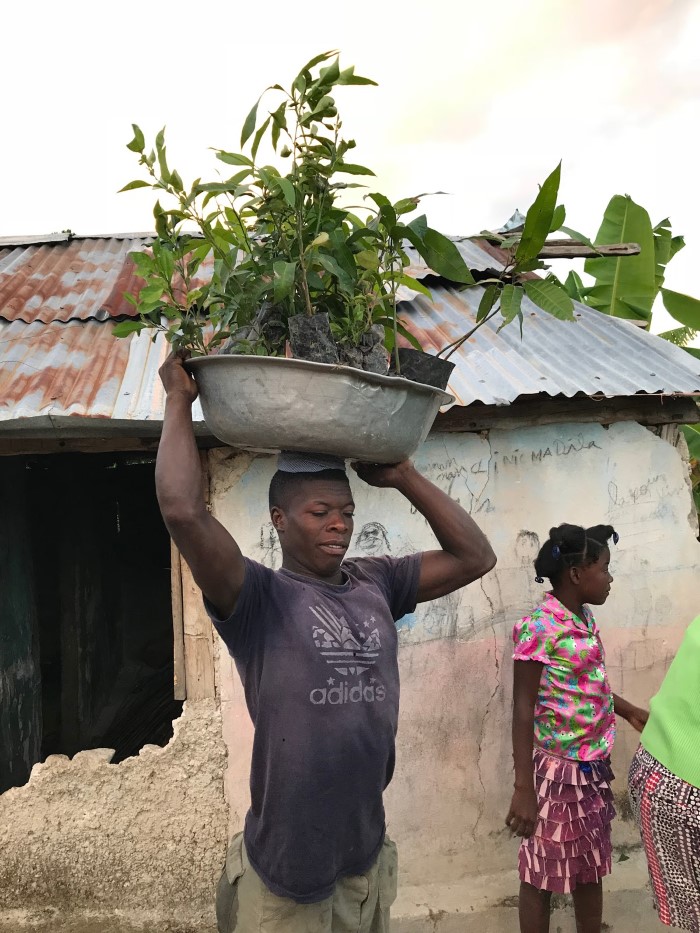 After seminars in village churches people take home the trees we distribute like this or on donkey side saddles.

Typical village nursery that we fund. Since we began reforesting in 2010, funding in certain areas comes and goes and people get used to having trees to plant and then suddenly they don’t.. This has caused frustration but also self-reliance or a culture of tree planting across the region where many villages organize themselves to grow trees like in the picture above. It really only requires some shared tools, manual labor and 1 penny per bag. Once people see what they are missing when we leave, they make it happen on their own and that is our mission in the Haiti Tree Project. Meanwhile, of course, we are starting the same initiatives in other villages. 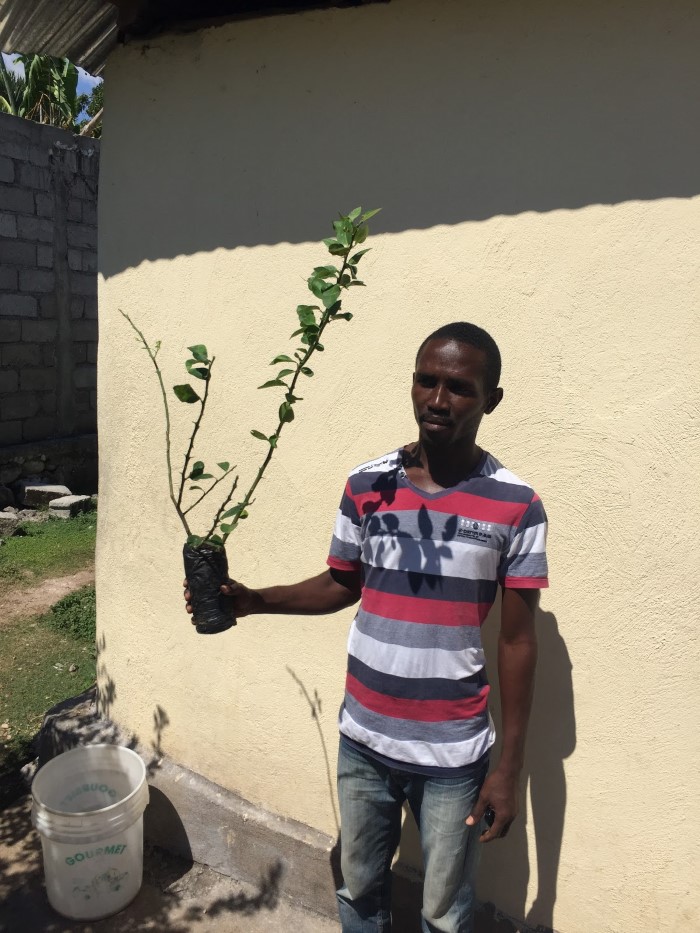 We went to a village where this man took us to his home to show us his lemon tree grafting. We now fund a community tree nursery there that he runs. 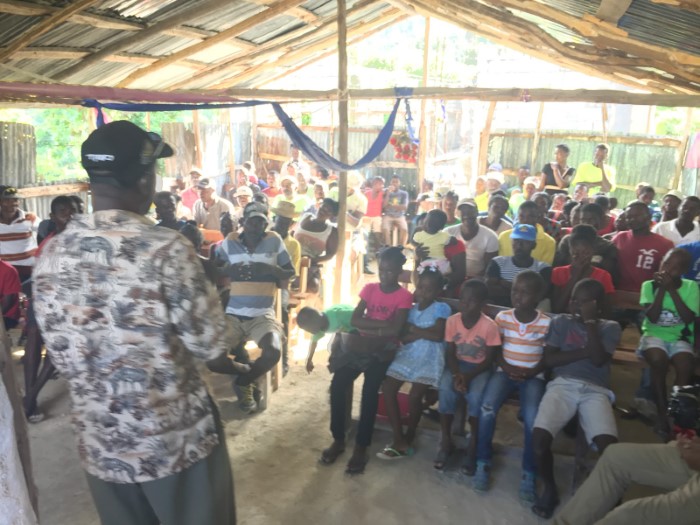 This is our key PR person, pastor, agronomist and veteriarian, Jean Nerva Aladin. A very trustworthy guy who has handled our project since 2011 while I raise my family in the US. When we have built up funding he and I travel all around the villages near Les Cayes going to places he knows to be prime location for reforesting. I meet the people during seminars/tree distributions and then I leave while he continues the work. 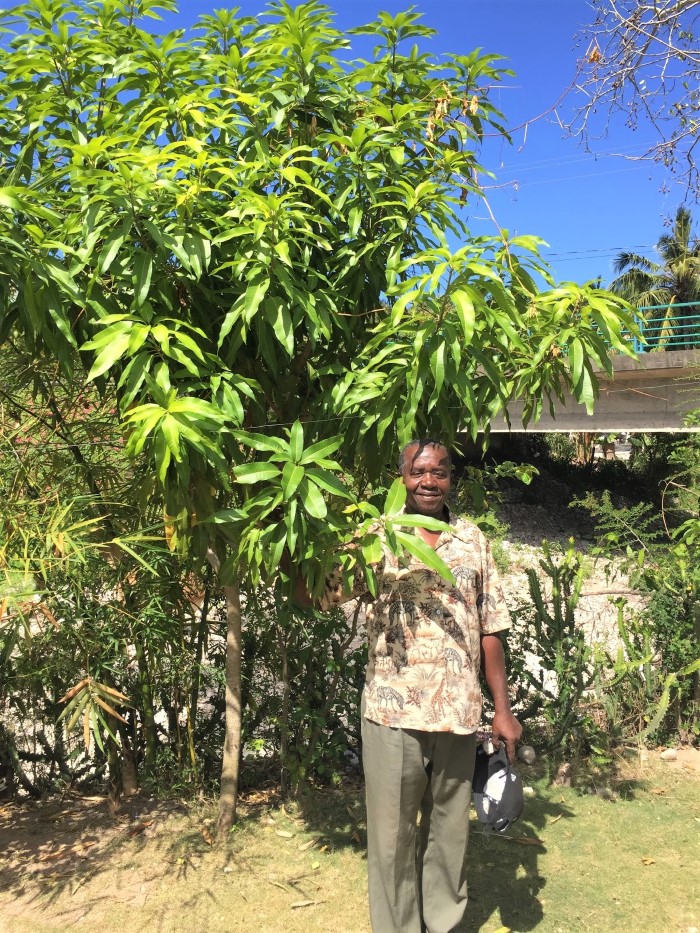 This is Jean with a 5 year old mango tree- one of the hundreds of mango trees we planted in 2011.

This is Ti Pierre and me. He is the true actionaire that grows trees by the hundreds every month on his land in La Sucrerie. He plants with out pay, just plants and plants and plants and somehow finds others to help him. He does it out of love for Haiti. He has supplies, tools from my previous funding , gets seeds off of trees. People take his trees home for free and he is dirt poor and just scrapes by somehow like most Haitians. He calls me constantly telling me about other communities that need trees and he can’t get them there. Years ago when we got funding from ForestNation, it was only Ti Pierre that came from his village 20 minutes away with a volunteered truck after a hurricane and dug up all our seedlings that had been washed away in floods out of the canal and took them back to the people of LaSucrerie.So that’s all I am thinking to share for now. Look forward to a good time working together.

Karen Nicolas has been leading reforestation efforts in Haiti since 2010. Her passion for reforestation grew from a desire to help people meet their basic needs in a sustainable way. As a lover of travel and adventure she grew a career out of working in relief efforts after natural disasters which led her to spending years in Haiti where she felt she could make the most difference.